A downloadable game for Windows, macOS, and Linux

The small town of Blue Hollow has always been a rather peaceful and uneventful place nestled in the mountains.

Claret, a perpetually listless girl, can no longer maintain her relatively placid lifestyle when strange happenings plague the town.
A pale young man, in his night clothes, is found at the Breezy Inn's doorstep,
a rumour of a phantom walking the streets of town at night and not to mention the peculiar lights and noises emanating from the old Burnwood Manor,
home to an eccentric old man who has been scarcely seen as of late.

With her colourful companions, new and old, Claret is begrudgingly tossed into the fray and must discover the source of the problems before something truly terrible might occur.

Only the Demo is available at present.

It may be a little buggy and there might be some grammatical errors but those will be fixed by the next release.

There is also no music but there will be in the final release.

A story filled with mystery and romance

A journal with suspects and clues*

Randomly generated clues and suspects in every playthrough* **

Claret Cordovan:
The protagonist of the story.
She comes across as a rather blunt and unsociable person.
She works for Cerise Marigold as her bookkeeper and on-off cleaner at The Breezy Inn.
She has a lesser known obsession with mystery books and bizarre stories.

Jay:
(Romanceable)
A rattled young man, pale in complexion and lacking in wits, who staggers into the Breezy Inn.
As "ghostly" as he seems, he seems to have something spooking him.

Roan Celedon:
(Romanceable)
The overtly friendly neighbour of Claret. He works several jobs to pay for the medication his ailing little sister.
However, he always makes time to pester Claret every so often for company.

Flint Corvin:
(Romanceable)
A suspicious young man who lingers around the outskirts of Sterling Manor.
He sports a rather sardonic demeanour around the few people he interacts with.

Shadow:
A mysterious entity Claret happens upon one unsuspecting day.
Its motives are unclear as it soon follows her around, much to her chagrin.

Cerise Marigold:
The vivacious innkeeper of Breezy Inn and Great-Aunt of Claret.
As amiable as she is, however, she doesn't tolerate unruliness or tardiness.

Mazarin Sterling:
The spritely elder is the proud owner of Burnwood Manor and keeper of many secrets.
His health is rumoured to be fading and has made fewer and fewer public appearances recently.

Tawny Chamois:
A reclusive novelist who travelled to Blue Hollow for quiet and inspiration.
She is rather temperamental when it comes to noisy disruptions while she works on her next bestseller.

*Available in the full release

This was made for the one month gamejam NaNoRen02017

Most updates will be here:

Will the final version be free/name your price?

It will be commercial :)

I have finished playing the demo, though, unforunately it was short. It gave me a sweet, short glimpse of the characters and i'm superbly intrigued to get to know all of them. I'm looking forward to the release!

Thank you for playing my demo! I'm sorry it's so short. I've been working on it alone, so progress was very slow and I could only manage a small demo before nanoreno was over. But the finished version will definitely be much longer and more fleshed out now that I don't have any time constraints. 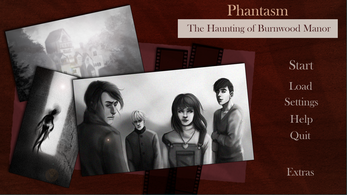 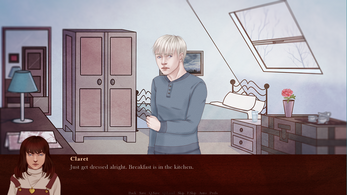 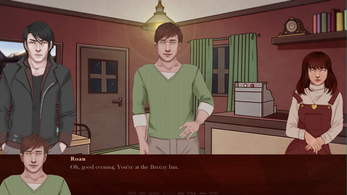